Imagine an area of about 3 hectares or 7.5 acres or the size of 3 football fields. Pretty big, eh? You walk by at 3:45 pm, and it looks just like a meadow with plenty of tall grasses and shrubs. Two hours later you come back and all you see is a lake! And that same process repeats itself day after day. When you look closely at the two pictures below, it gets even more bizarre. In the back, there is a wall. When that strange place presents itself as a meadow, it seems to be much higher than when it is a pond. The same can be observed looking at the gazebo on the right.

So, where exactly is this weird pond-meadow? In Guilin, almost adjacent to the Chinese Language Institute (CLI) where I spent another five weeks studying Mandarin and having a fantastic time in fall 2016. It even has a name, 黄初塘 huáng chū táng, Huangchu Pond.

The region is famous for its karst formations containing plenty of sinkholes, caves, and underground streams. One might expect a city with lots of ups and downs but Guilin is oddly flat, surrounded by karst mountain ranges with plenty of stand-alone hills splattered throughout.

While I was there, I asked around but nobody had an answer. Since then, we searched the English and Chinese parts of the web but couldn't find anything about Huangchu Pond. There are hardly any general clues about this phenomenon online. A possible geological term might be karst fenster, defined as "a feature where a spring emerges with the water discharge abruptly disappearing into a sinkhole." But the more I look at the pictures, the more it looks as if the lake might always be there, and it's this piece of land that gets sucked in and pushed back up.

I found a few other reports about "disappearing rivers" and "reappearing springs". People got quite excited about some puddles that matched the description. And then there is Lost Lake in Oregon that disappears in a sinkhole; the "refilling" in this case seems to occur through rainfall and snowmelt. If I'm not mistaken, then the Huangchu Pond is unique – maybe even a yet undiscovered natural wonder?

To find the pond on Baidu Maps enter 桂林市 朝阳西路. On Google Maps search for Guilin, The Chinese Language Institute. The two maps look quite different. For anything in China, I've decided to trust Baidu.

Just for the record, it hadn't rained a drop in weeks, and it's definitely not man-made – truly a natural mystery.

Any geologists out there who can shed a light?

There's another pond nearby, nothing extraordinary about it, but I love the reflection of the surrounding buildings in the water: 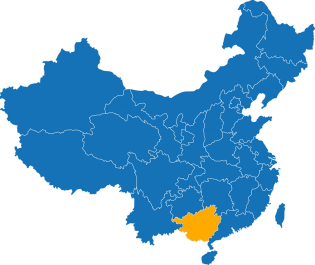